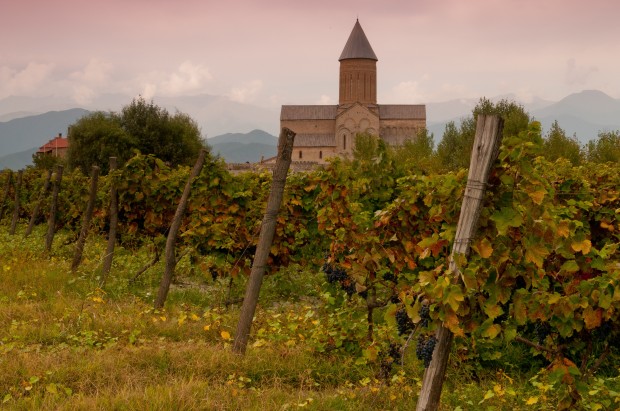 Georgia has a long history of religious harmony. Different religious minorities have lived in Georgia for thousands of years and religious discrimination is virtually unknown in the country. Several religions, including the Armenian Apostolic Church, Roman Catholicism, Judaism, and Islam, traditionally have coexisted with Georgian Orthodoxy. According to Orthodox tradition, Christianity was first preached in Georgia by the Apostles Simon and Andrew in the 1st century.It became the state religion in the first half of the 4th century.For over fifteen centuries, the Orthodox Church became an essential part of the Georgian spirit.

• Driving to Alaverdi monastery ( While parts of the monastery date back to VIc, the present day cathedral was built in the XIIc,At a height of over 55 meters, Alaverdi Cathedral is the second tallest religious building in Georgia )
• The Academy of Ikalto XIIc.
• Visiting of Gremi a XVIc. architectural monument – the royal citadel and the Church of the Archangels
• Back to Tbilisi, Ovenight Tbilisi
Day 5

• Transfer to Mtskheta – old capital of Georgia, Sightseeing of Mtskheta – one of the oldest cities of Georgia Due to its historical significance and numerous ancient monuments, the “Historical Monuments of Mtskheta” became a UNESCO World Heritage Site (Jvari monastery VIc – located at the top of the hill, place where the missionary St Nino herself erected a cross (“jvari” in Georgian) in the 4th century to mark the coming of Christianity to Georgia)
• Svetitskhoveli cathedral XIc. where The holy fathers venerated the myrrh-streaming wood of the Living Pillar and the Robe of Christ, Samtavisi cathedral XIc
• Overnight Tbilisi

• Transfer to Kazbegi,Stepantsminda is a small region of north-eastern Georgia. It is the center of the KazbegiMunicipality. On the way visit beautiful “Ananuri” Fortress XVIIc.
• Visiting“Gergeti”trinity XIVc.(church at the top of the mountain- 2170 m)
• Overnight Kazbegi
Day 7

• Driving to Khertvisi fortress (one of the oldest fortresses in Georgia – built in Xc.)
• Atskuri Temple built in X c.
• Transfer to Vardzia cave monastery complex (which was founded by Queen Tamar in 1185,there are up to 300 caves distributed on eight levels)
• Transfer to Tbilisi, Leaving party at the Georgian national restaurant
• Departure

Note: Duration of the tour will fit to your arrival and departure flights.